Projects
School Amateur Radio Clubs have inspired a number of very interesting radio and electronic projects. We are developing more all the time. We include them here so that you can be inspired too! Unless otherwise indicated, everything is free for non-commercial use and our software is released under the GNU General Public Licence. So you can pretty much do what you want with it, provided you just keep the copyright statement and reference to this website. For those wishing to learn more about Arduino programming please see our Arduino For Amateur Radio Workshop. An excellent eBook on the subject, which can also be used to guide year 5 or 6 students, is Getting Started with Arduino. Good luck with your project and keep in touch with your own questions, project ideas, news and pictures. Here is a list of all the SARC projects on this website:
Project List
High Altitude Balloon Payload MTG004
This project was our first Global Space Balloon Challenge payload. It transmits alternating JT9/JT65 telemetry on 30m SSB. It was launched on 19 April 2015. For more details please see our Amateur Radio magazine article and GippsTech technical presentation: 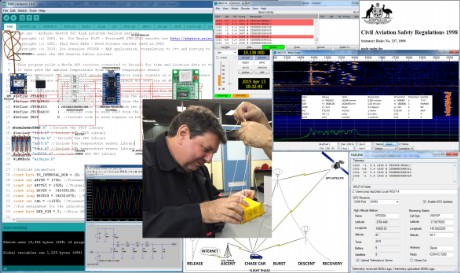 High Altitude Balloon Payload SARC1
This project is our second Global Space Balloon Challenge payload. It transmits BPSK31 telemetry on 434.650MHz FM. It was launched as part of the 2016 ANZAC Day Amateur Radio Special Event. Both SARC students and Melbourne region Scouts participated in the launch and then tracked the payload on their mobile devices. 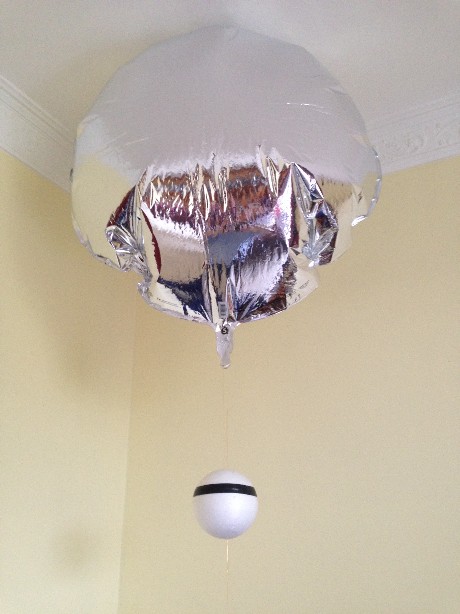 Speech Synthesizer for the Yaesu FT-817
This project enables the whole SARC class to hear the frequency, mode and signal strength of our Yaesu FT-817 transceiver. The project was nicknamed "Rachel" after the synthetic British female voice we used for text-to-speech conversion. It could also be useful for operators with impaired vision. For more details please see our Amateur Radio magazine article and source code: 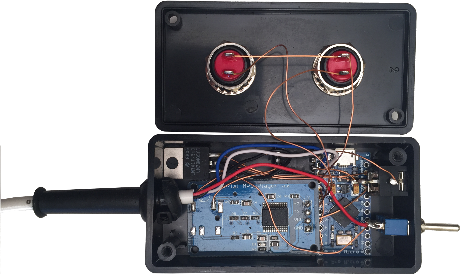 Universal HF Tracker Project with F4GOH
This project is in collaboration with our very good friend Anthony Le Cren F4GOH in France. Anthony has kindly produced an excellent PCB of our Arduino tracker with several of his own improvements. Everything needed is on the PCB including MOSFET switches to control the GPS and DDS and a powerful dual BS170 RF amplifier and Low Pass Filter. It uses our original AD9833 DDS library for operation up to 12.5MHz. We intend to use this evolution of our design for many different School Amateur Radio Club projects including a WSPR beacon, JT9/65 HAB payload and even an Ocean Current Tracker! Anthony also has a very good Ham Projects blog with may other great projects. Thank you Anthony! 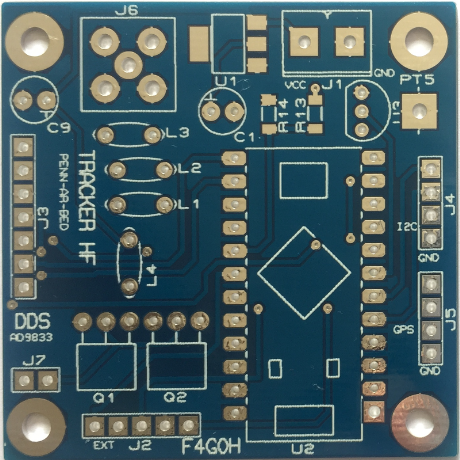 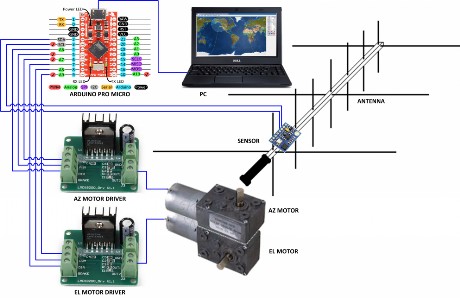 Mini Satellite-Antenna Rotator Mk 2 - Arduino Medium Duty
This project is a mechanical re-design of the original Mini Satellite-Antenna Rotator Mk1 using the same electronics and software for a medium-duty rotator capable of rotating two, 3m long, cross-polarised Yagis. There is a MK2a version using sprockets and roller-chain and a Mk2b version using pulleys and timing-belt. 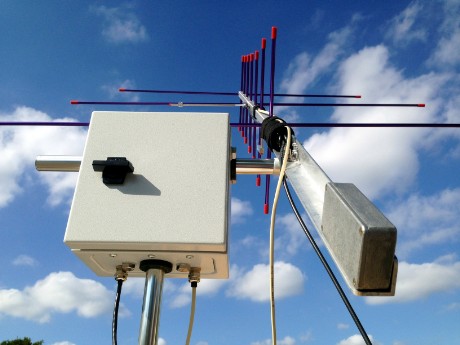 SARCTRAC - Satellite Antenna Rotator Controller and TRACker
SARCTRAC was developed so that students at our School Amateur Radio Clubs can have fun and learn about Low Earth Orbiting satellites during our lunchtime sessions. To make friends with a satellite you first have to know when and where it will be; point a small, directional antenna at it and use an Amateur Radio transceiver to listen or talk to it. It is a bit like fishing in the sky and just as challenging. It is really exciting when the kids hear their first satellite and then realise where it is. They always ask. “Can we talk to it?” We say. “Of course, you can.” But the reality is that satellites move so fast that their position and radio frequency is constantly changing. Tracking a satellite by hand, while trying to tune an Amateur Radio transceiver for a typical 10-minute overhead pass, is a real chore for kids. Setting up an automatic tracking system, with a commercial antenna rotator and all the computers, cables and programs needed, is both tricky and expensive. So, we made SARCTRAC quick and easy for the kids to set up and now it does all the work for them. SARCTRAC helps kids spend more time listening to signals from space, receiving data or pictures and even communicating with others via satellites. School kids in space? No problems!
See some videos of SARCTRAC working on our SARCNET YouTube Channel: 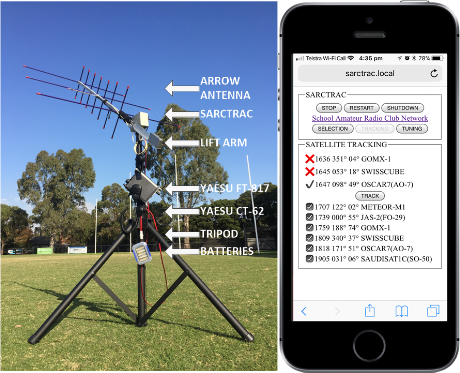 SDR Receiver
This project is a VHF/UHF Software Defined Radio. It demodulates AM, FM, LSB and USB signals. It has a frequency, mode and bandwidth control, an automatic gain control, squelch control and a waterfall display. The receiver runs on a Raspberry Pi 3 and uses an RTL-SDR DVB-T Dongle. Students can listen to the fascinating world of VHF/UHF communications. 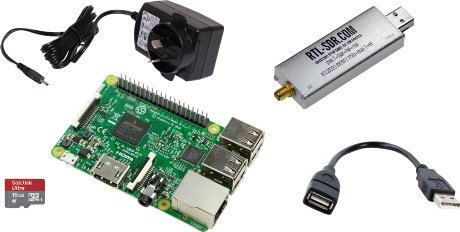 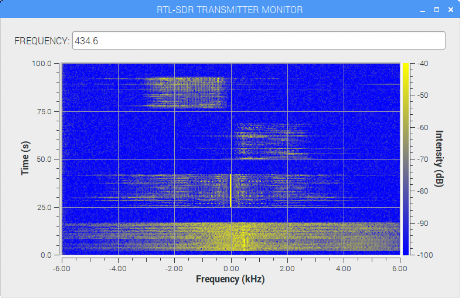 SDR AIS Receiver
This project lets SARC students track vessels coming into port. It is an Automatic Identification System (AIS) receiver. It picks up information about passing vessels and uploads it to an AIS server over the Internet. Students can check out pictures and information about the ships and costal receiving stations on a web site. 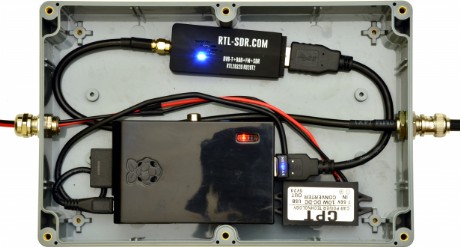 Portable Radio Terminal
This project is a self-contained, portable Amateur Radio station specifically designed for demonstrating Amateur Radio digital modes, receiving High Altitude Balloon telemetry and communicating via Amateur Radio satellites. It can be quickly setup outside in the playground, at a park or even on a mountain summit. It comprises a Yaesu FT-817 transceiver, a Raspberry Pi computer and a sunlight readable touchscreen display. Better still it can be powered from a small 25W solar panel. It can be used to demonstrate all our other projects. 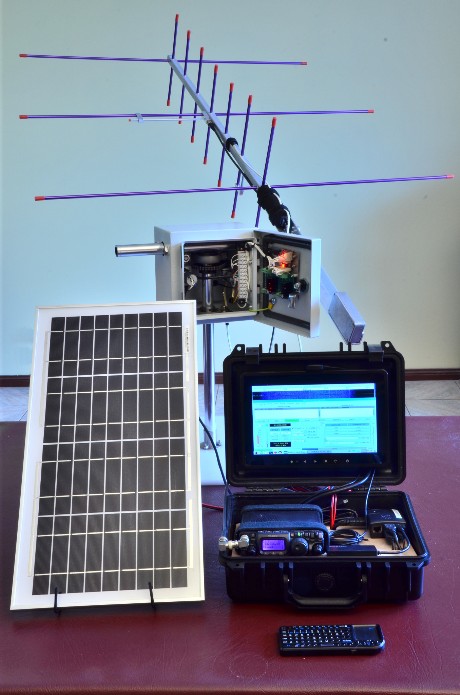 Amateur Radio Direction Finding Telemetry Unit
This project lets SARC students, while engaged in a simulated search and rescue missions, send their ARDF tracker bearings back to base camp using Amateur Radio digital communication mode BPSK31. The device sends the call sign, date, time, latitude, longitude, altitude, azimuth, elevation and checksum over an HF radio link. At the base camp, the fix is decoded on our Raspberry Pi Portable Amateur Radio Terminal using FLDIGI and bearing lines are plotted on a map using OpenStreetMap and OpenLayers. 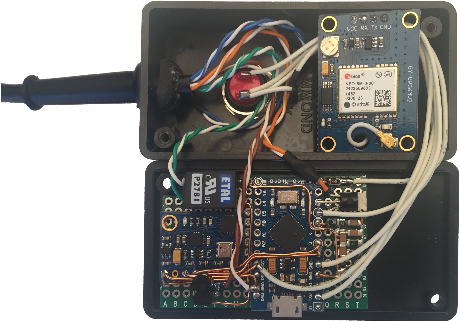 Automatic Packet Reporting System on HF
This projects lets SARC students on outdoor missions report their GPS location using the APRS network. A commercial Terminal Node Controller and GPS Receiver are used to send the information over an HF radio link to the APRS Internet Service via a participating APRS IGATE station. Their location can be viewed using a web browser.

Remote Radio Control Server
This project provides full access and control of an Amateur Radio transceiver from anywhere in the world over the Internet. It is used to participate in SARCNET sessions, at lunchtimes, while at work or overseas. A single Raspberry Pi computer provides a Voice over IP server for transmit and receive audio and a Web server to control the rig. 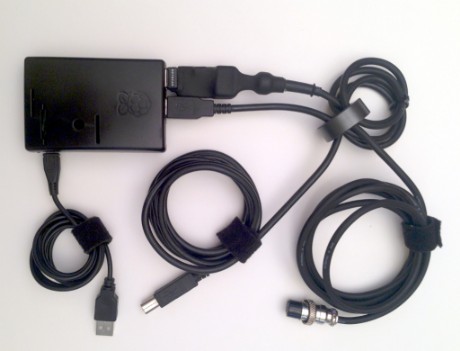 Robotics Platform SARCBOT
This project lets SARC students learn all about robotics while designing and building their own robots. SARCBOT1 is based on an inexpensive, 4WD, Arduino Car Kit, which we modify to become the universal power supply, drive and navigation platform for the student's own robotics projects. Arduinos are used for the all robot sensing and control subsystems. SARCBOT2 is based on an inexpensive tracked vehicle kit, to which we mount modular power, drive, controller and sensor subsystems. These robotics platforms are based on Arduino microcontrollers. Later a Raspberry Pi 3 will be added to correlate the sensor inputs and take overall control of the robot. It will also provide robot vision and WiFi command and telemetry capabilities. 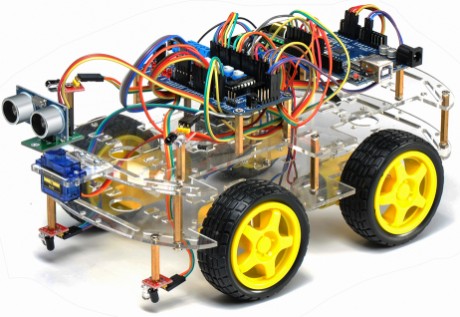 USB Rig Interface
This project is a USB Audio and PTT interface for rigs, which don't directly support digital modes. Plug these interface devices into your Windows or Linux laptop or Raspbian Raspberry Pi and you can send and receive digital tones from your rig and automate the PTT control.
The Rig Audio Interface uses a CMEDIA CM108 7.1CH USB Sound Card, which is one of the few devices which actually works on Windows PCs, Linux PCs and the Raspberry Pi. The original case and the 3.5mm phono jacks and LEDs are removed from the PCB. Two ETAL P2781, 600 Ohm, microprofile, audio line transformers are then glued onto the PCB and connected to the origianl PCB pads using 0.4mm solderable enamelled copper. Shielded cables, with suitable connectors for your rig, are then soldered to the transformers. The whole assembly is then enclosed in 19mm, dual wall, heatshrink tubing. Note: There are two different sound card PCB layouts available, type 1 and type 2. Please check which one you have.
The Rig PTT Interface uses a Genuine FTDI USB Serial Port device and a VN-10, N-Channel Enhancement Mode MOSFET to drive the Rig PTT line from the DTR signal. 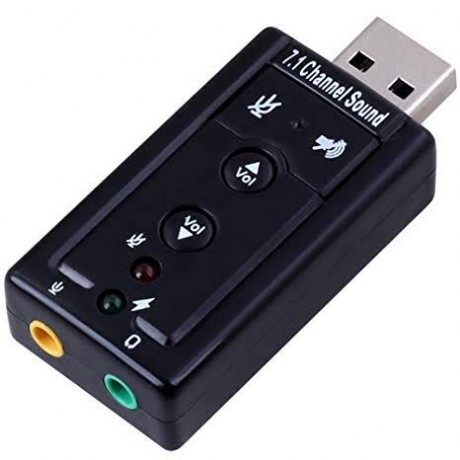